"A lawyer shall conduct him/herself in accordance with the standards of professional integrity and personal courtesy set forth in the Civility Principles of the United States District Court for the Eastern District of Michigan," and that "[t]he lawyer shall abstain from disrespectful, disruptive and/or abusive behavior, and will at all times act with dignity, decency and courtesy."

2nd Circuit finds that failure to turnover a tax refund as required in a prior chapter 13 plan could be basis for dismissal of subsequent chapter 7 under §727(a)(2)(A). Bad facts in the case.

Regulation Z requires monthly mortgage statements, showing due date, amount due, and payment breakdown (principal, interest, and escrow), disclosure of charges since last statement, and list of transactions since last statement. Contact information for the mortgage, principal balance due, current interest rate, next date any interest rate may change, and whether there is a prepayment penalty also must be disclosed.

If the loan is delinquent, then information must be disclosed showing the date of the delinquency, the amount to cure, an account history for up to 6 months showing the amount due from each billing cycle, a disclosure of loss mitigagtion options, a notice whether foreclosure has been commenced, and a reference to homeowner counselling.

Mortgages in a pending bankruptcy are exempt, and there is some caselaw indicating that if a chapter 7 was filed and the mortgage not reaffirmed, this may not be required. It should be required after completion of a chapter 13 unless the plan provided for surrender of the property.

Court in New Jersey rules that debtor can strip mortgage despite there being a non-debtor co-owner.

Lien Stripping of Mortgage on Property with Co-owner at time of Filing allowed.

FYI to Tampa bankruptcy attorneys: Kelly Remick is now taking the position that cure & reinstate and mortgage modification cases must run at least 3 years even if the ongoing mortgage payment is the only thing being paid in the plan. 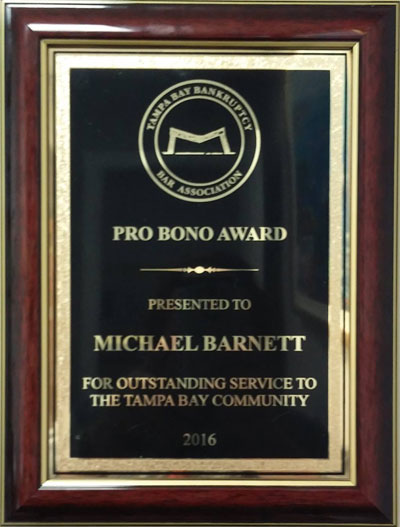 Judge Delano overrules objection to claim of my client, and allows secured claim based on divorce order requiring sale of jointly owned property to pay ex-spouse's interest in property.

Just in case anyone didn't know, exempting a vehicle (nevermind a vehicle purchased shortly prior to filing chapter 7) and claiming it as exempt, does not prevent the creditor from repossessing it after the discharge; nor does the repossession constitute "grand theft auto," "criminal stalking," and "providing false information to a law enforcement officer"
McFarland-Rourk v. Drive Time Credit, Inc., No. 4:15-CV-163 (CDL), 2016 WL 3014679, at *1 (M.D. Ga. May 24, 2016)

Interesting case distinguishing recoupment based on contract from recoupment based on legislation (ie overpayment of social security benefits), finding that post-petition entitlements do not arise from same transaction as prepetition debt, and therefore are not eligible for recoupment.

Court finds that lease assumed post-petition under §365(p) cannot be revoked despite noncompliance with reaffirmation provisions.

Analysis of permissibility of attorney-fee only chapter 13 plans.

Orlando District Court affirms Judge Jennemann's order that statute of limitations does not prevent foreclosure five years after accellearation of debt where foreclosure is based on separate default from first accelleration or judgment. "While it is true that a foreclosure action and an acceleration of the balance due based upon the same default may bar a subsequent action on that default, an acceleration and foreclosure predicated upon subsequent and different defaults present a separate and distinct issue."

Judge Jennemann finds that homestead only attaches to residence of Debtor where 1/2 acre plot inside city limits includes both debtor's residence and separate residence occupied by her adult daughter.

Detailed analysis of issue of vesting surrendered property in mortgage holder in chapter 13.

Some clients call all the local attorneys asking what their fee is for bankruptcy. There are a number of problems with this. First, generally the fee depends on what is involved in the case, as well as which chapter is filed. If any information is given by the caller about their financial situation, this creates a need to document information for the caller to prevent future conflict of interests. It also triggers the need to provide and have the caller sign the Debt Relief documents required by the 2005 bankruptcy law. So any attorney that gets information over the phone without also getting the name, address, and indentifying information is not acting ethically. More important to the client, it takes 30-60 minutes of detailed information to determine what potential problems are in the case, and any good attorney should insist on this before making a recommendation or quoting a price. Despite our firm taking much more time than most in this process, we often are advised that the fees we ultimately quote are substantially less than the fees quoted by other firms.

We recently had a discharged chapter 7 case where Defense Finance and Accounting Service (DFAS) was offsetting military retirement checks against a pre-petition obligation for overpayment of postal health insurance benefits. After contesting initial correspondance advising them this was a violation of the discharge injunction, we filed a motion for order to show cause against the US/DFAS for violation of the discharge injunction. The US Attorney responded citing 5 USC §8906(3)(1)(B)(ii) purporting to allow 'recovery' of advance payments, and claiming this gave them the right to setoff the debt. In correspondance DFAS also alleged a right of recoupment.

Counsel should be aware of the limits to any right to collect funds owed prepetition against funds owed postpetition. There is no special right to the US Government absent specific dischargeability statutes.

Increasing mortgage arrearage claim from $3800 to $13300 3 months before plan completion leads to 9011 sanctions.

Found another nondischargeability statute I never saw before. 42 USC §254o(d)(3)(A). This includes liability under a default in contract where the debtor received money (either loan or other funds) in exchange for a contract to work in healthcare for a specified time in a rural community. If the contract is not complied with they are liable for double damages for the portion of time not completed, plus interest. The law provides that statutes of limitations do not apply to the obligation, and the obligation is nondischargeable for 7 years after the first payment on default comes due AND only if the court determines that requiring repayment would be unconscionable.

Judge Williamson denies motion to compel surrender where foreclosure is 2 1/2 years after chapter 7.

On December 6, 2011, the Debtor received her chapter 7 discharge.4 Two-and-a-half years later, Deutsche Bank (BAC Home Loans' successor-in-interest) sued to foreclose its mortgage on the Debtor's property.5 The Debtor opposed the foreclosure action by filing various defensive motions and was ultimately able to get it dismissed on summary judgment.6 Now the Debtor is seeking fees and costs against the Bank in the foreclosure action.7 The Bank says that the Debtor's efforts—successful as it turns out—to oppose its foreclosure action after she has received her chapter 7 discharge is contrary to her stated intent to surrender the property.

Advisory to Debtor attorneys: in one recent audit of a chapter 7, the auditors are alleging that funds from the sale of a former residence of the debtor are income for purposes of the means test. Note this conclusion appears to be contrary to the case of In re Leach, No 08-61028-13, 2009 WL 1010552 (Bankr. D.Mont. Feb. 26, 2009). The case law does appear clear that if the debtor is in the business of buying and selling the property sold, then the income is included in the means test; according to some cases without regard to the basis of the property sold. Similar results if the property sold was investment property. Where neither of those applies I believe case law is less clear, but at the least the auditors hired by the US Trustee appear to believe it is income (though if non-recurring, should be backed back out of the means test as special circumstances).

Judge May ruled Wednesday on one of my objections to a mortgage claim that the mortgage company was not allowed inspection fees incurred prior to the notice of default/accelleration when the note provided for payment of costs and expenses 'if the Note Holder has required me to pay immediately in full as described above...' in the notice of default section. Case 8:15-bk-07322-KRM. Many of the older notes have similar provisions, which could even provide a basis for challenging attorneys fees and costs if no notice of default/accelleration occured prior to incurring such fees and costs.

Over 25 Years in Florida

Michael Barnett has provided his services in and around Tampa, Florida covering Hillsborough, Pasco and Polk County for over 20 years.

The BBB has determined that this business meets accreditation standards.